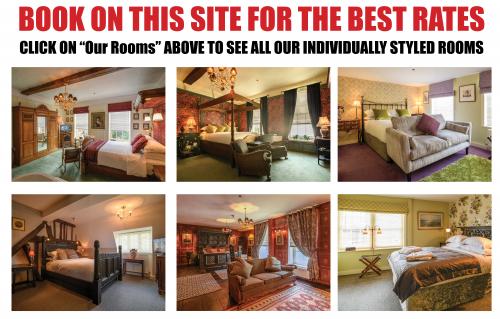 Buckingham House dates back to the early part of the sixteenth century when, in 1523, it was first licensed as "Le Greyhounde" as an inn in the charge of Richard Palschyd who was a collector of taxes. It then became home to John Chadderton who was Captain of the garrison at Southsea Castle. Many exposed timbers in the property have been dated back to circa 1450 by English Heritage experts. By 1628 the building was known as Ye Spotted Dogge Inne and was the scene of the assassination of George Villiers, Duke of Buckingham by naval lieutenant John Felton. The dagger which is reputed to have been used to commit the murder is on display. The house had been prepared for a visit by the King with special panelling in his proposed bedchamber. On the day of the murder, it was thought too dangerous for the King to venture into the old High Street. After the death of Buckingham, the property is mentioned in the diaries of Samuel Pepys with an entry for May 2nd 1661 saying he went to "visit the room where Buckingham was killed". At the time of the murder, Buckingham House was owned by Captain John Mason who went on to be the founder of New Hampshire in America.

In the early seventeen hundreds the house was bought by Dr William Smith who is thought to have been responsible for the installation of decorative panelling in the William and Mary style in about 1707. Dr Smith died in 1732 and left a bequest for the foundation of Portsmouth Grammar School which now is sited alongside Buckingham House. After the Second World War the building was rescued by architect Mr R A Thomas who carried out a restoration which was featured in an article in The Times, London. After many years of use as offices, the building was sold by private treaty to the existing owner who has carried out an impressive further restoration of this Grade II* Listed property. Buckingham House, now Ye Spotted Dogge,  offers 6 beautiful en-suite rooms with guest lounge, breakfast room, private bar and a substantial secluded garden for the exclusive use of residents.  Enjoy our luxury Egyptian cotton bed linen &towels plus the "Scottish Fine Soap Company" toiletries.

Ye Spotted Dogge is just a short walk away from major attractions including the Mary Rose Museum,  H.M.S. Victory and H.M.S. Warrior at the Historic Naval Dockyard and the 170m high Spinnaker Tower.

Ye Spotted Dogge is available for exclusive use.  Please call or e-mail the property direct for further information.  Catering for private events can also be arranged by individual quotation.

There is a drop off area for luggage just to the left of Ye Spotted Dogge marked on the road by an "Entrance"  sign. After check-in you will need to move your vehicle to on-street parking. There is a meter charge for on-street parking however guests will be supplied with a complimentary 24hr parking permit for each day of their stay.  We regret that permits do not guarantee a space.  Secure off street parking is available at a charge of £20.00 per day by prior booking and subject to availability.  90 "Pay and Display" parking spaces are also available just a few minutes walk from the property overnight and at weekends on Portsmouth University land - permits are not valid at these sites.

Double Room  from £165.00
The Red Room from £265.00
rates are per room per night inclusive of a continental breakfast
for the number of people agreed on the confirmation and includes V.A.T. at 20%.

There is no capacity for extra beds in any of the rooms.

ARRIVAL &DEPARTURE
Arrival will be from 15.00hrs and rooms should be vacated by 12.00hrs on the day of departure.

Selection of Our Rooms

View all our Rooms here

Check availability and book direct through our website for best prices.

Check availability and book direct through our website for best prices.